What Is Brainwave Entrainment?

Brainwave Entrainment (BWE) refers to the ability of the brain to change it's electrical response as a direct result of external rythmic stimulation, usually from sound or light. The human brain consists of billions of brain cells called neurons. In order to communicate with each other, neurons use electricity. Because of the large number of neurons simultaneously firing electrical impulses, a large amount of electrical activity is present in the brain. Due to this activity, sensitive medical equipment such as an EEG (Electroencephalogram) can be used to measure and record the levels of activity in different areas of the brain. This electrical activity is called a brainwave pattern.
When a rythmic stimulus is presented to the brain such as from drumming, the brain will begin to syncronize its' brainwave patterns to match the frequency of the stimulus. Recent research has found that the drumming found in many cultures is most often kept at a rate of about 4.5 beats per second. People listening to this constant beat will find themselves in a trance-like state. 4.5 beats per second corresponds to 4.5hz, which is in the low theta brainwave state. This process is called the "Frequency Following Response" (FFR).
The most common forms of brainwave entrainment are binaural beats, monaural beats, and isochronic tones:

Binaural and Monaural beats used for entrainment are formed by sending

different tones in each ear, and the brain perceives these two tones as the difference of the two tones as a result. For example, if you were to introduce to the left ear a tone at 220hz, and another tone at 210hz to the right ear, the brain will perceive these tones as one 10hz tone. This would bring the brains' dominant brainwaves into the mid alpha state (See Brainwave States below).

Binaural beats are by far the most commonly used entrainment method, although not the most effective. The reason for their popularity is simply due to their initial use in cognitive and neurological research since Gerald Oster in the seventies and then further study by those such as Robert Monroe of the Monroe Institute.

Because the tones have to be created in the brain, headphones are required for binaural beats. Otherwise they become monaural beats before reaching your brain; while this can still lead to entrainment, some methods are better than others depending on the application and the intended result. Binaural beats have a generally accepted range from .235 to 26.25hz although they have been used successfully in the higher Beta and Gamma states. One major benefit of binaural beats is that in order to create a binaural beat, the brain must use both hemispheres (both the left and the right) which can result in what is called "hemispheric synchronization".

Instead of being a sine wave pulse like monaural beats, isochronic tones are individual pulses of the same tone. They are typically better at entrainment in most entrainment applications and have the added benefit of not requiring both ears to work. This is especially beneficial to individuals with impaired or a loss of hearing in one ear. These tones can also be used to entrain each hemisphere seperately or together since they only require one ear. However similar to monaural beats, isochronic tones begin to lose effectiveness (though still effective to some degree) below 4hz, and they generally must also be louder than the other beats to be effective. 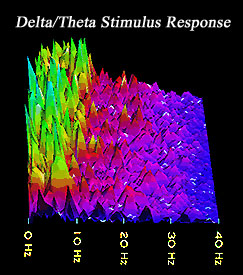 It should be noted that all brainwave states are present in the brain at all times, with one brainwave pattern dominating. That is to say, if you are in an alpha state, that doesn't mean to say you are only experiencing alpha waves, but rather that alpha waves make up the largest percentage of brainwaves at the current moment. The picture on the right illustrates this. The individual was given a delta/theta brainwave frequency series and clearly there can be seen a spike in the theta and delta brainwave states, yet there is still activity in the higher brainwaves, ending with very little in the 40hz (gamma) frequency range. 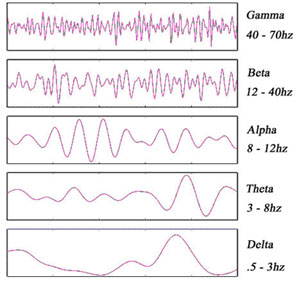 Gamma: Found in monks experiencing transcendental mental states, and during bursts of insight or high level information processing.
Beta: Normal waking state; present during times of increased attentiveness, concentration, energy, and stable emotions.
Alpha: Relaxed state during meditation, daydreaming, first thing in the morning, just before falling asleep, and hypnosis.
Theta: Dominant during light and rem sleep, extreme relaxation, increased creativity, visualizations, imagination, and problem solving.
Delta: Usually during deep, dreamless sleep, also during the "White Light", or "Void" meditative states of timeless suspension.
Extraordinary and Recently Discovered States:
Frequencies found much weaker in most individuals, however recent research had revealed a higher dominance of Gamma and Hyper Gamma brainwaves in Tibetian monks, especially during Loving Kindness meditations.
Only recently discovered due to the difficulty in obtaining an accurate EEG reading at these levels. Lamda brainwaves are associated with integration and wholeness, as well as ecstatic states of consciousness.
As with the Lamda brainwaves, these brainwaves were only recently classified due to the difficulty in the recording of such low brainwave states. Epsilon brainwaves seem to share the same states of consciousness (integration, wholeness, and ecstacy).
It has been postulated that along with the Epsilon waves, there are Lamda waves modulating along with them; essentially an Epsilon wave with Lamda waves embedded within it. And conversely, Lamda waves are seen as riding upon a larger Epsilon wave. This would explain the strong similarities between Lamda and Epsilon waves*.

*As noted by Dr. Jeffrey D. Thompson at the Center for Neuroacoustic Research